Chinese New Year - Chunjie, also means Spring Festival, is the most important holiday for Chinese. It is celebrated over 2000 years. It falls on the first new moon of the first month of the year, between the 12th of January and the 19th of February. After introduction of Gregorian Calendar this holiday became known as “Spring Festival”, to separate it from the New Year according the western style. In daily use Chinjie is called “Nyan” (which means “year”).

According to legends, Nyan – is a terrible evil monster with horns on its head, which lived in Ancient China. All year long the monster was in depths of the sea and just on the New Year’s Eve it went out of the water, broke into the villages, ate cattle and killed people there. That’s why local peasants feared him very much and annually before New Year coming they left their villages with families, and they ran out deep in the mountains, to hide from evil beast Nyan.

One day, in the New Year’s Eve, when peasant of village Tao Hua ("Peach blossom"), supporting old people and keeping little babies in their arms, they left the village in horror, old beggar with mustache of silver color came there. He held a cane in one hand, and a bag in another hand.

At that time some people were closing windows or were locking houses, other people were packing things, and still others were leading bulls and sheep, so in a word, everybody was busy and was in panic, therefore nobody paid attention on this old beggar. Only one old woman, which lived in the eastern part of the village, gave him a little food and she persuaded him go away as soon as possible, to not face with the Nyan monster. However this old man, stroking his mustache, chuckled: “If you allow me to stay at your home for one night, then I will drive the Nyan out of the village”.

The old woman was looked at him with amazement and she noticed that this hoarhead with youthful face looks hale and hearty, but she persuaded him anyway to go up on the mountain, to hide from predatory Nyan. But old man insisted on his own way, and the old woman had to leave alone.

To midnight Nyan broke into the village. But this time he found that something is wrong in the village, not like all past years. In horror Nyan had seen that there was a light in windows of the house of the old woman, and doors were painted in red. When he reached to the front door, suddenly bamboo firecrackers had cracked. He didn’t dare to come in the yard.

It turned out that Nyan is afraid of red color, bright fire and loud noise. At this time gate had opened and that old beggar go out of house, wearing in red robe, and he laughed loudly. Nyan looked at it, scared to death and he ran out in panic.

On the second day, that is on the first day of New Year, villagers came back to village. They saw their houses weren’t destroyed and they were surprised. Then the old woman understood what’s going on and she told them about a promise of old beggar. After the story of the old woman, all peasants of village rejoiced, dressed up in new clothes and congratulated each other with new peace, happiness and prosperity. This story was spread to neighboring villages and soon everybody knows how to drive the monster Nyan out.

Since then, each year in the New Year’s Eve people paste red holiday inscriptions on doors, run firecrackers, light fires in houses, they don’t go to sleep and stay awake all night long, that is called in Chinese “shou sui” – “to protect the year”.

New Year night Chinese call “the night of meeting after parting”. This is the most important moment of the year for them. All family meets at celebratory table for the New Year dinner, which characterized by the abundance and variety of dishes. For instance, New Year dinner doesn’t go without dishes from chicken, fish and “doufu” – the mean curd, which we call “tofu”, because in Chinese the names of this food are consonant with words “happy” and “prosperity”.

On the north of China it’s common habit to eat dumplings (Jiaozuo), on the south – “nyangao” (slices, cooked of glutinous rice). Northerners prefer dumplings, because in Chinese the word “Jiaozuo” is consonant with words “seeing off the old and meeting the new”. Besides that, dumplings remind traditional golden and silver ingots by their shape, and they symbolize wish of wealth. At the same reason southerners eat “nyangao”, which symbolize improvement of life every year.

The first five days of New Year are destined for meetings. Relatives, friends, classmates, colleagues visit and congratulate each other with the New Year.

A tradition of the giving of gifts is not very spread in China. On Chunjie a traditional gift is Ya-sui jian – that is pocket money in special red envelopes, which commonly children are given. Keeping the old customs, people give money to any child, which came in their house in the first 15 days of the New Year. Nothing wrong if the red envelope isn’t found on hand, it can be done without it.

At Spring Festival noisy national celebrations and fairs is taking place during several days, where people perform the dance of lions and dragons, round dances of “land boats”, performances on stilts. New Year celebrations ends after the Festival of Lamps, in the fifteenth day of the first month at the Lunar calendar.

Year on the Chinese calendar:

In 2016 Chinese New Year falls on the 8th of February.

The team of portal ozozon.com recommend not to miss this faery spectacle and join it in the New Year! 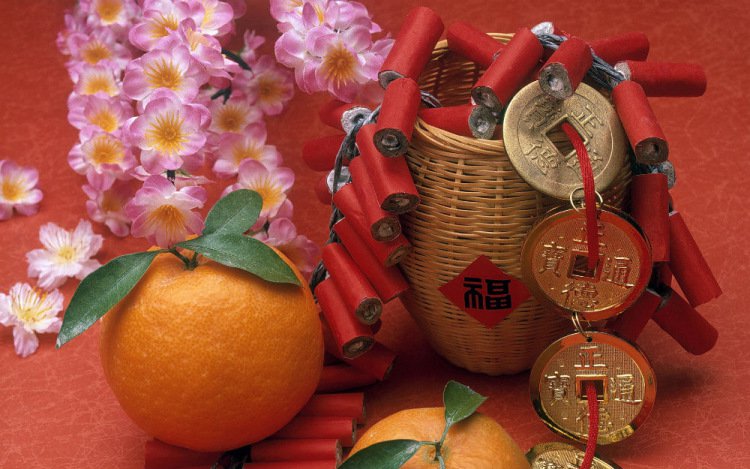 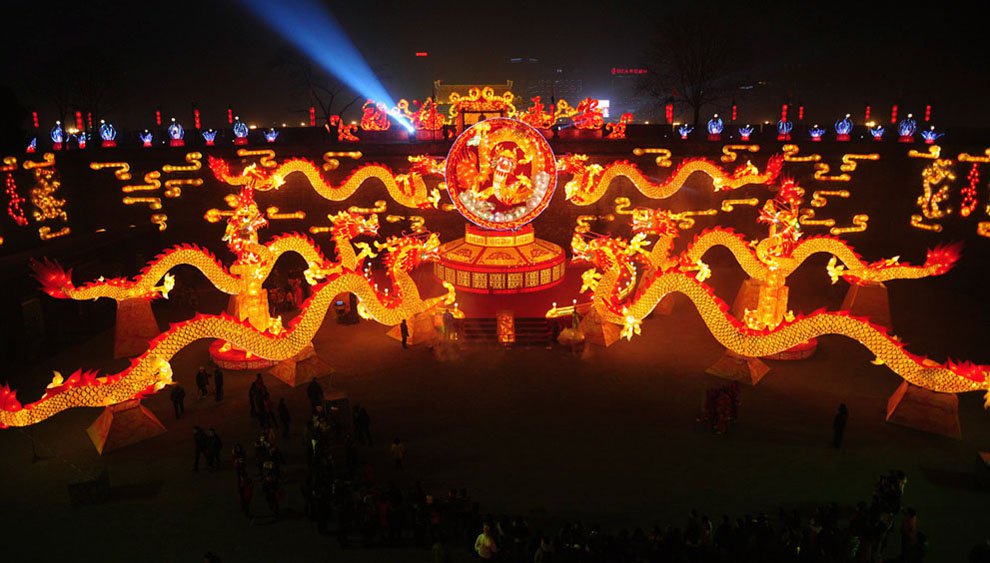 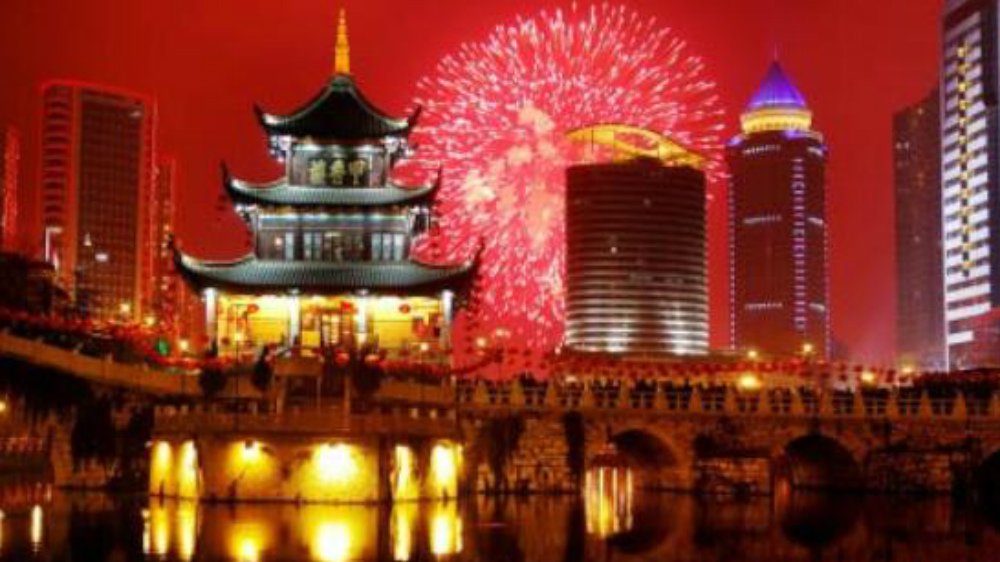 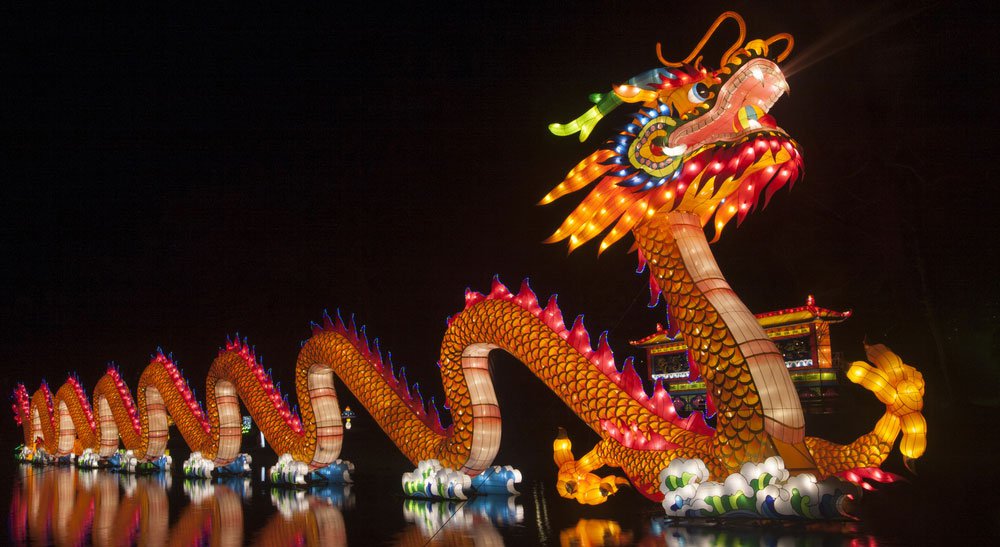 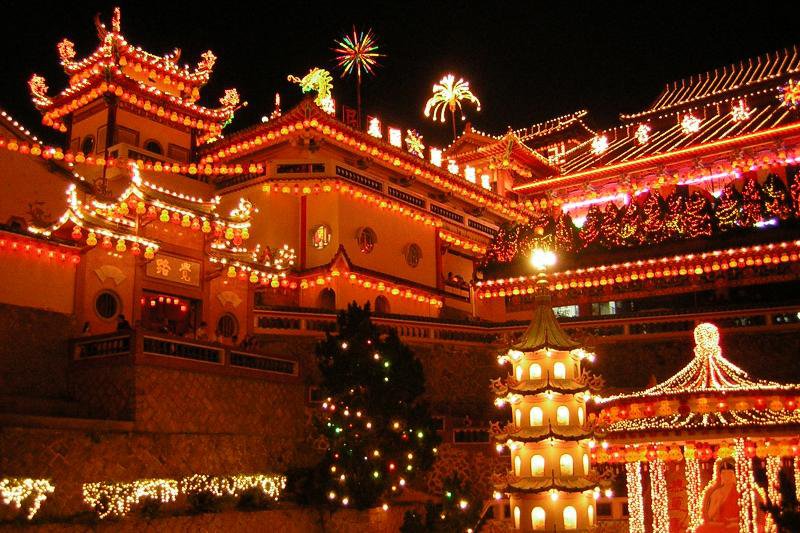